Liposomes are an excellent drug delivery tool, but they have excellent targeting properties, so to achieve targeting, it is often necessary to add additional targeting materials to the formulation of liposome excipients. This targeting is based on the unique characteristics of target cells, the most common of which are various receptors on the cell surface. Excellent macrophage targeting is critical for Clodronate Liposomes, which relies on improvements in liposome formulations.

Liposome targeting macrophages can be achieved by: 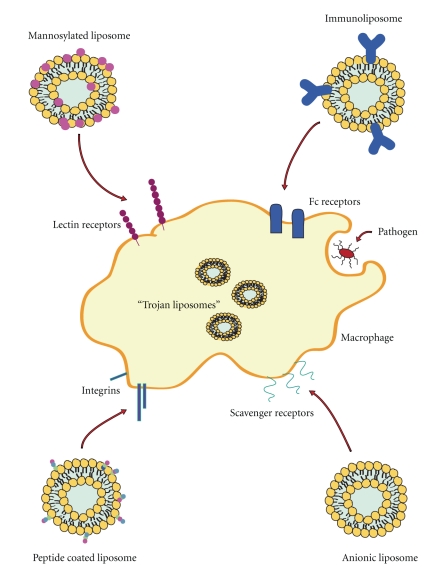 Mannose is one of the carbohydrate components on the surface of many bacterial and viral cells, and the human immune system has evolved multiple mechanisms to recognize pathogens based on mannose recognition.

MR is a C-type lectin 175-kD type I transmembrane protein whose ligands have terminal non-reducing sugars such as mannose, glucose, N-acetylglucosamine and fucose. MRs can recognize and phagocytose pathogens through surface carbohydrate antigens, play numerous roles in immune function, including antigen recognition, endocytosis, and antigen presentation, and are critically involved in homeostasis maintenance, inflammation, and immune responses. Meanwhile, mannose receptor binding is one of the earliest proposed mechanisms for liposome targeting through surface modification of liposomes.

Many mannose-linked liposome derivatives exhibit selective uptake in vitro and distinct biodistribution patterns in vivo, and one study showed that mannosylated (ManDog) clodronate liposomes efficiently deplete in vitro immature cardiomyocytes, while non-mannosylated liposomes have no effect. Huitinga, et al. treated two groups of animals with a liposomal formulation of p-aminophenylmannose-clodronate and a standard formulation in the same experiment. The p-aminophenmannose group did appear to experience fewer clinical symptoms and limited disease progression compared with the standard clodronate liposome group, but no specific reports of macrophage depletion or other between the groups were reported. In conclusion, mannosylated clodronate liposomes may have better efficacy and targeting.